Tony Mertlik, owner of TM Design & Engineering, LLC, has been involved in machine design with MABEG feeders for nearly 20 years.

“Tony Mertlik, GBC Engineering Manager and leader of the team that developed the GBC 8500HS Cyclone, has been with the company for over 12 years and in the printing and finishing industry for over 20 years. A native of the Czech Republic, Tony is regarded as one of the world’s foremost experts on laminating systems.”

Düsseldorf (GERMANY) –GBC, an ACCO Brands (NYSE: ABD) business and market leader in the manufacturing and distribution of laminating equipment and supplies, successfully achieved a new Guinness World Record at Drupa 2008 by establishing the fastest time to laminate 100 square meters of paper.

… “Mertlik, Elman, and Koepke now hold the Guinness World Record in their names. The GBC 8500HS Cyclone is a commercial laminator designed for single-sided lamination of high-volume print runs. Running at speeds up to 500 ft (150 m) per minute, this system can cut production time by one-half or more without sacrificing accuracy, control, and quality.” 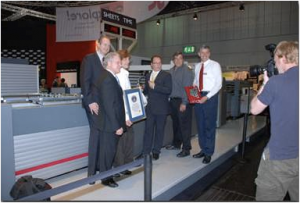